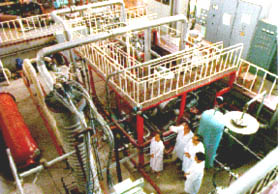 The division of Thermal Hydraulics is formed since the establishment of INET. A large number of test loops have been set up to develop advanced reactor technology. The Laboratory of Advanced Reactor Engineering and Safety was established by this division with test facilities as an experimental base, which has developed into a first-class laboratory of Tsinghua University since 1992 and key laboratory under the Ministry of Education of China since 2000. It plays an important role in the R&D of the Nuclear Heating Reactor (NHR) and the High Temperature Gas-cooled Reactor (HTGR) at INET.

Head of the division: